AFTER the success of The Great Country Song Book I with Troy Cassar-Daley, Adam Harvey approached his good mate Beccy Cole to duet with him on the second edition and they’re taking it on the road.

Adam Harvey said the live show was going to be fun for him and the audience as Beccy was a one-of-a-kind entertainer.
“Hardest part is trying to keep her focused because she just cracks me up,” he said. “The hardest part for her is having to look at me and sing those love songs.” 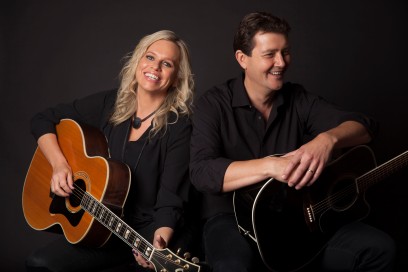 The songs on the album are all country classics that the artists loved and they have breathed new life into them with their versions.
“The songs inspire you because you have a chance to get back to these old songs that are very simple, but amazing,” Adam said. “With music, and a lot of new music, there’s a hell of a lot going on with lot of lyrics, music and production. The older songs is what the heart of country music is all about.”

Beccy said it was their eighth or ninth national tour together and the artists together just worked.
“We’ve always threatened to do an album together and this was a perfect opportunity,” she laughed. “These songs come from an era from before Adam and I were even born – they were old when we were young. My other sang a lot of them and I know they work as fresh songs.”

Beccy said the album was about bringing the songs back to a new generation of listeners and about “tipping your hat” to the older artists.
“There were lots of great love songs from that era, so this album needed to happen as far as these tributes with a male and female,” she said.

Adam felt some pressure in releasing the duets album because of how the originals sounded and how these songs would be compared to them.

Troy adds his voice to the track, Yesterday’s Wine, the three of them together and they wrote a song together on their last tour called Country Heroes which is the final track on the album.
“It’s all about those country heroes and thought it would be a shame if it never saw the light of day, that song,” he said.

Beccy said one of the hardest parts of putting the album together was deciding which songs to leave off.

“These are a great mix of songs,” she said “You had to do Kenny and Dolly and just about Kenny and everyone, and Loretta and Conway.”

“I absolutely love You’re The Reason Our Kids Are Ugly – it’s great to breathe life into this song for a whole new generation,” Beccy said. “I also love Two Story House with it’s double meaning, but there is also something really cool and really retro about it.”

Beccy said the tour wasn’t just about getting on stage and singing the songs; the artists wanted to give the audiences an experience. It’s sure to be an enjoyable one.

Check out the artists’ websites to find out where they’e playing next.