By Rebecca Belt
ADAM Harvey was of the first performers to take the stage at CMC Rocks Queensland this year and was also one of the first artists on CMC Rocks the Snowys, 10 years ago.
As CMC Rocks celebrates its 10th festival, country music fans continue to flock to the event. It’s now put the house full signs up for two consecutive years.
“The fact that it’s sold out is testament to how big the event is getting,” Harvey said. “It’s a great chance for us to catch up with our mates because we don’t get to see each other, other than at big events like this.” 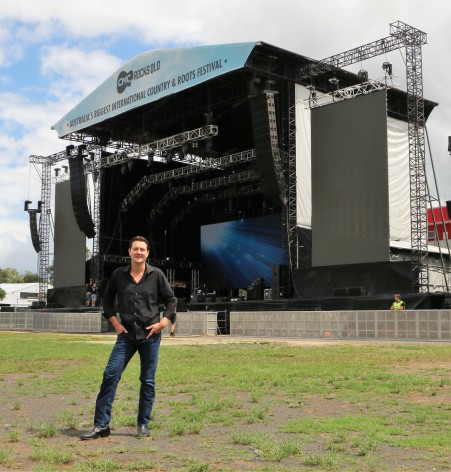 The Golden Guitar winner said it also wasn’t often that you worked on a stage as big as the main stage.
“CMC Rocks is also a great chance to network with the American artists,” Harvey said. “They are all so down to earth and humble, and for people wanting to go to Nashville, it’s a great chance to meet and organise songwriting partnerships.”
The Central Coast singer-songwriter said, as well as opening the main stage entertainment, he had the chance to be a fan and watch other artists perform.
“There are some other acts I’ve never seen before and it’s a chance to watch what they’re doing,” he said. “I’m here as much as a punter as a bloke who sings some stuff.”
Harvey will hit the road with good mate Beccy Cole until October as they perform songs from their new album, Great Country Songbook Volume II.
“We’re already running through the shows,” he said. “We’ve done six or seven tours together. She’s so good to tour with because she’s funny and quick-witted and it’s great to sing all those old country songs together that we love.”
When he’s not writing songs and performing, Harvey is working on a book titled Tales From The Road.
“I’m halfway through it and I’m going to finish that this year,” he said. “It’s all the good stuff from the road; nothing nasty.”