IT’S my favourite time of the year of the year again, so I’m bringing back the daily blog. I hope that’s okay with everyone.

If we haven’t met before, in person, through my writing or digitally, I am a country music journalist who lives in Tamworth, Australia’s Country Music Capital. For 13 years I worked for the local daily paper and for the past decade I was the country music writer there. This is my first Tamworth Country Music Festival for more than 10 years that I haven’t been reporting on it for the paper, so here we are doing it electronically. The paper is still around, never fear, and a new team is bringing you all the news there.

I’ll be bringing you as much news as I can via The Country Journo website, Country News Snippets weekly newsletter and this daily blog.

For those visiting Tamworth, welcome, and for those who aren’t here in the best city in the world, then I hope I can bring a bit of Tamworth onto your computer screens during the 10 days of the country music festival.

To kick off the country celebrations, I’ve just returned from the CMAA Senior Academy of Country Music graduation concert at Wests. It was amazing. Every year is amazing, but this year they seemed to set the bar even higher than usual.

I’ve been there each day organising media coverage and it’s been amazing seeing the students at the start and watching them at the graduation concert tonight. They have grown not only as music artists, but also as people and it’s been an honour to be part of seeing that. I have no musical talent, you see, so I must stick to writing about it.

The three groups performed and showed exactly what they’re learned during their time at academy and the group leaders and a few of the special guests also performed during the graduation, demonstrating the depth of talent we are so lucky to have in country music. A special and emotional part of the night was the tribute to the beautiful Karl Broadie who we tragically lost after a short cancer battle, in 2016. He was a group tutor in January 2016 and not a day goes by when his musical mates don’t think or speak of him. There were few dry eyes in the house as Gretta Ziller began playing bagpipes tonight and students – past and present – playing Coming Home and sang These Are The Best Days. I love the country music family. 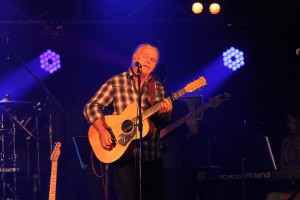 It’s going to be another massive festival and I hope you’re all ready for the ride. My advice is always to go steady and don’t peak too early; you won’t make the end, otherwise.

So, grab your hats, your boots and plenty of water and get out amongst it.