It may be the Queen’s Birthday public holiday in many states, but the Tamworth Country Music Festival is giving country fans the gifts with more shows on sale for the biggest country music festival in Australia on Monday, October 1.

With existing tickets in high demand, festival goers will be pleased to hear that additional shows are now available to add into their schedules for the 47th Toyota Country Music Festival, Tamworth.

The DAG Sheep Station, Capitol Theatre and Tamworth Town Hall are just some of venues that will be drawing in the crowds as tickets for popular artists including The Pigs and Sara Storer and collaborations for Australian & Great Britain Country Showcase and Songwriters Retreat Showcase come up for grabs from Monday.

AS WE count down to the announcement of the CMC Rocks Queensland 2019 artist announcement, Rebecca Belt revisits some of her CMC Rocks 2018 interviews.

A FLYING visit Down Under in March saw Dean Brody perform twice at CMC Rocks Queensland to the delight of the Australian country music lovers.

Arriving on the Wednesday prior to the festival and leaving on Sunday didn’t give the Canadian singer-songwriter a lot of time in the country, but enough time to leave a lasting impression with new and old fans, alike.

The singer-songwriter said he would love to return to Australia and spend a month or more here to really appreciate the country and soak up the sights.

FOLLOWING a tour through the home of Oktoberfest is the perfect time for singer-songwriter Emma Dykes to release her new single, A Drink In My Hand.

The North Coast NSW country artist toured Germany in August, and released A Drink In My Hand on September 17. END_OF_DOCUMENT_TOKEN_TO_BE_REPLACED

IT IS hard to beat the harmonies and depth of songwriting of Bennett, Bowtell & Urquhart as the trio launch their album, Weeds, tonight, September 14, at the Acoustic Picnic in Sydney.

“Recording this album was easier this time because we know our sound and roles now and we all understand the space we have to leave, too,” Felicity Urquhart said.

“Leaving the gaps is just as important as the harmonies and the arrangements are fun to work out, too. This project was always about enjoyment, although we get in there and work hard.”

END_OF_DOCUMENT_TOKEN_TO_BE_REPLACED

FROM the rolling hills of Picton to the mine trucks of Paraburdoo, singer-songwriter Jemma Beech has experienced it all this year, and her experiences have resulted in her stellar debut album, That’s Just Me.

Released on Friday, September 7, That’s Just Me is a culmination of songs from Jemma’s life up to now with plenty of cheekiness and girl power thrown into the mix.

The 25-year-old country artist moved to driving mine trucks in the Pilbara in March this year and her songwriting has flourished.

Working seven days on, and seven days off has meant Jemma can concentrate on music on her days off and dedicate a block of time to her craft and gigs.

“I’ve enjoyed the new experiences that the move has brought,” she said.

“They love having a performer up here because I’ve been able to sing at the Anzac Day ceremony, supported the Johnny Cash tribute show and on a Wednesday night on my weeks off, I go out to Cheela Plains Stations Stay and play around the campfire for the guests and they love it.” END_OF_DOCUMENT_TOKEN_TO_BE_REPLACED

NASHVILLE singer-songwriter Devin Dawson spoke with Rebecca Belt about expressing his truth through country music and the lyrics of the tracks on his album, Dark Horse.

Coming from years of performing in heavy metal bands gives his brand of country music an edge. END_OF_DOCUMENT_TOKEN_TO_BE_REPLACED

TRAVIS Collins will take a message of healing to the stage this weekend as he begins touring his new album, The Brave and the Broken.

This album is not his first rodeo, but the day prior to release he told The Country Journo’s Rebecca Belt that he was more nervous and excited than when he released his debut offering all those years ago.

“It’s such a huge effort this record and such a true reflection of where I’m at with my music and my life,” Travis said.

“I’m super proud of this record; there’s not a song on it that doesn’t reflect me.” END_OF_DOCUMENT_TOKEN_TO_BE_REPLACED

THE Gympie Music Muster kicks off this week – August 23 – and continues to give back to rural communities who are doing it tough.

“Depression and isolation become more prevalent, spending in regional towns decreases and the knock-on affect is widely felt,” she said.

“Music festivals like the Muster help to alleviate some of that pain, by bringing like-minded people together for a mental break and giving them the chance to relax for a few days. They also help to draw money into our regional communities at a time when it’s needed most.”

Seventy-five percent of 2017 Muster-goers travelled from outside the region to attend, contributing to an overall economic impact of $6.20m for Queensland, 83% of which was felt in the greater Gympie region.

“The Muster has always been about community coming together,” Lori said.
“And we are privileged to be able to be continue that tradition in a meaningful way again this year.”

In the lead-up to this year’s festival, the Gympie Music Muster donated 30 four-day festival tickets to Drought Aid to bring drought-affected landowners to the event, and will also shout them a feed at the Muster’s Biggest Ever Bloke’s Lunch hosted by 2018 charity partner Prostate Cancer Foundation Australia. 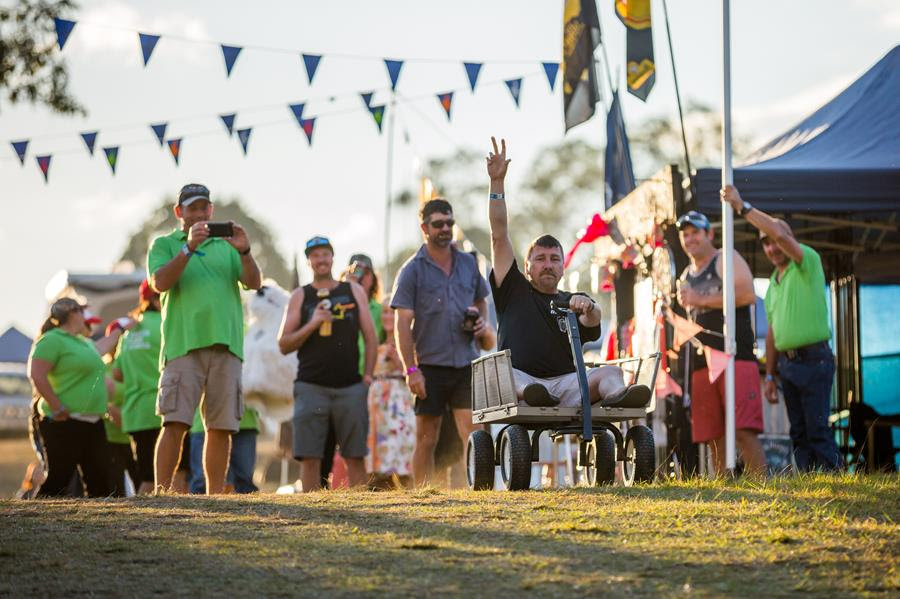 The Muster is a much-needed helping hand for those regional communities doing it tough.

END_OF_DOCUMENT_TOKEN_TO_BE_REPLACED

If you can listen to this album with dry eyes, you have no feelings – it takes you from laughter to sadness, through regret and love. END_OF_DOCUMENT_TOKEN_TO_BE_REPLACED