THE name that has been high on CMC Rocks audience members’ lips for so long is Luke Bryan and organisers have granted their wishes with the country singer, known for his dance moves, headlining the 2018 festival. 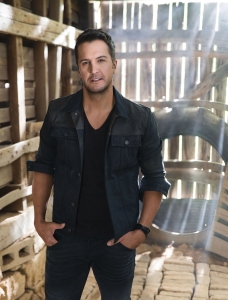 Alongside Luke, fellow US artists Darius Rucker and Kelsea Ballerini round out the headliners. The excitement doesn’t end there, with a swag full of international and Australian acts gracing the stages of CMC Rocks Queensland in 2018.

From across the ditch, CMC welcomes Jody Direen and Kaylee Bell back to the fold.

Crowds will begin flocking to Willowbank Raceway on Thursday, March 15 for campers and then Friday, Saturday and Sunday for the general admission ticket holders.

Pre-sale tickets went on sale yesterday, Wednesday, October 4, and sold out within an hour, but never fear, general public one-sale begins at 10am AEDT (9am Qld) on Monday, October 9, so don’t miss out.

Want to know more about the artists?

Luke is a two-time CMA Entertainer of the Year makes his Australian debut at the event. He’s sold more than 10 million albums, 40 million tracks worldwide and has chalked up 3 billion streams, and with current single ‘Light It Up’ currently making waves at country radio worldwide, Luke is a bonafide superstar. Luke has just been confirmed as a judge on the new season of ABC’s American Idol, he performed the US National Anthem at this year’s Super Bowl and consistently sells out stadiums across the US, from Chicago’s Soldier Field to Cleveland’s First Energy Stadium, performing to over 5.6 million fans over the last three years.

Multiple Grammy Award-winner, Darius Rucker, will land in Willowbank for his first ever-Australian performance at CMC Rocks QLD 2018. With eight #1 Billboard Country Singles under his belt, including ‘Homegrown Honey’, co-written with label-mate Charles Kelley (Lady Antebellum), and ‘If I Told You’, the lead single from his forthcoming fifth studio album out October 20, Rucker (former lead singer with Hootie & The Blowfish) will have some fresh new cuts to unleash on CMC Rocks audiences when he lands down under in March.

Country’s hottest female artist Kelsea Ballerini returns to the CMC Rocks stage after last year creating history as the first ever female artist to achieve three consecutive #1 US Billboard hits with ‘Love Me Like You Mean It’, ‘Peter Pan’ and ‘Dibs’. Since then, she has sold out two national headline tours across North America as well as her own headline shows in the UK, garnered a Grammy nomination for Best New Artist, supported the likes of Tim McGraw, Lady Antebellum, Thomas Rhett and Carrie Underwood, and has performed live on The Tonight Show with Jimmy Fallon. With a brand new album Unapologetically due for release next month, Kelsea is one of the most exciting artists on the world music stage.

Fresh from supporting Sir Elton John on his recent Australian dates, Rockhampton duo Busby Marou are well-versed on the live stage and are one of Australia’s best-loved roots acts, making their CMC festival debut in 2010. Cutting their teeth gigging around QLD before nabbing support slots for Dolly Parton and James Blunt, they now have an APRA Award for Blues & Roots Work of the Year, and an ARIA chart-topping album, Postcards from The Shell House, to their name.

CMC Rocks QLD returns with an extended festival program due to overwhelming demand and exclusively for campers in 2018, with the Jack Daniel’s White Rabbit Saloon hosting live music from 1pm on Thursday, March 15 through to 2am the next morning. On Friday, March 16, performers will kick off at 10.15am with gates opening at 9.15am, providing more live music action than ever before.

With huge demand for on-site camping each year, event organisers have secured an additional paddock for 2018.

Completely selling out for the past two consecutive years, the festival attracts crowds of more than 15,000 music lovers daily, coming from as far as North America, Sweden, Singapore, Germany, Austria and a big contingent from New Zealand, injecting more than $6.1 million into the local Ipswich economy.