AS MUCH as I love the festival, today it stepped up a notch with a chat with the always lovely Luke O’Shea and the Toyota Star Maker Grand Final in Bicentennial Park.
Earlier today, I sat down to have a chat with Luke about his work with Defence Care as an ambassador with Amber Lawrence, and about his three finalist placings in the CMAA Country Music Awards of Australia. Australian country music is full of so many talented and intelligent singer-songwriters and Luke would have to be up there with the best of them. These artists are not afraid to shy away from the big issues in the world and the things that matter to them, personally, and affect everyone in the nation. They are a major inspiration to this little country journo.

After that great catch-up, there was Toyota Star Maker. Under a blanket of stars, the up-and-coming artists of the country music scene demonstrated why they were the in the top 10 of the competition. As well as seeing the best and brightest in country music, my other ultimate highlights were seeing two of my absolute favourite singers, Darren Coggan and Brendon Walmsley perform. I don’t see enough of them and they showed the calibre of talent that comes through Toyota Star Maker. 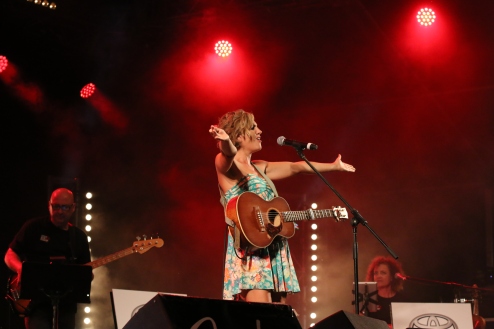 Guy Sebastian also performed as a special guest, after a day spent checking out the rodeo and other activities the festival had to offer.
Rachael Fahim took out the Star Maker title this year, with the oh-so-talented Karin Page handing the crown to the 21-year-old NSW singer-songwriter.

After the competition, I had the chance to chat with Rachael backstage and it was lovely seeing the support all the competitors offered each other. It was also beautiful to see the 2017 CMAA Senior Academy of Country Music students there to support colleagues Liam Kennedy-Clark who assisted with academy band duties, and Angus Gill, who was a student this year.
The friendly nature with which the competition is run shone through backstage, although there were, understandably, many disappointed artists. There is only one winner, but they are all winners for getting to the top 10 in the first place, in my eyes.
After competing the interview, part of which was conducted by Taylor Blackburn’s (of Haystac) phone torch when the power went out, and taking plenty of photos, I wandered back through Peel St and up Fitzroy St. It is just beautiful to see Tamworth so alive and so many people out and about not wanting to cause trouble, but just having a good time together.
The Tamworth Country Music Festival is not only a celebration of our country’s music, but also a gathering of so many like-minded people that it is like a massive family reunion each year. It is one I will proudly be attending for the rest of my life.