By Rebecca Belt
BUDDY Goode is back with another album of trashy music sure to tickle your funny bone. More Rubbish was released on Friday, December 16, and he has dedicated to the fans he has spoken to after shows and who have left comments on his Facebook page.
“Over the years, you tend to read Facebook and get lovely comments after the shows,” he said. “Some of the people think you’re rubbish, so I’ve dedicated this to the people who think I’m rubbish. Here is more rubbish.” 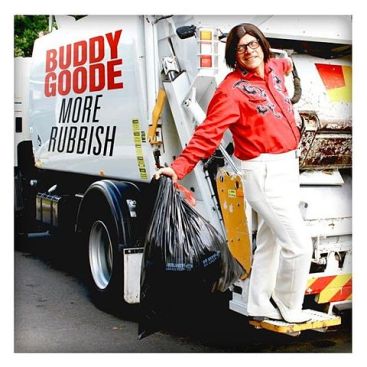 Like all good songs, the stories were inspired by the ARIA Award winning artist’s observations of life.
“I love reflecting on life, on how things change and how we develop, so one of my favourite songs is Gay,” he said. “I see what’s happening in the world these days and not everyone is gay anymore.”

Buddy turned 50 this year and he and his friends he’s observed are going through certain things that happen at this stage of their life, so he gathered all the main things and put them in a song and Mid Life Crisis was born. Ink is about Buddy’s early childhood and Camel Toe was inspired by Buddy’s first pair of high-waisted jeans he bought in the early 1980s. Being a religious man, Buddy has also paid tribute with Big Man In The Sky, which mentions a God of Australian country music, Kevin Bennett.
“Even after his five nominations (in the 2017 Golden Guitars), he seemed to be a little more thrilled that he was mentioned in a Buddy Goode song,” he said.

Buddy said he was supportive of the industry, but hoped to be embraced more and would like to see his name among the finalists of the Golden Guitars. The journey to being an ARIA Award winning artist began at the Tamworth Regional Entertainment and Conference Centre when Buddy wanted people to be able to let loose and relax at the end of the week.
“Because there’s nothing on television, everybody is a little bit serious and I think Buddy takes them to a place where they can just forget about that,” he said. “This inspired Nothing On TV. They don’t get reminded of life during the shows and for people who come and see me live, the show is different every time so they don’t know what they’re going to get.”

For those coming to Tamworth, Buddy will showcase all the rubbish he has, in a show at Wests’ Diggers on January 25. The gig will include all the songs from the new album as well as favourites from his past offerings.
“I love it,” he said. “Having a new album helps because more people are interested in you and I’ll be doing the main show as well as Fanzone and radio stuff. It’s great to get back and chat to everybody, but the highlight for me is the show.”

The singer-songwriter said he enjoyed meeting new people after the show.
“It’s nice to see new people are being introduced to the world of Buddy Goode and, being the day before Australia Day, no one has to go to work the next day.”

If you’re anxious for Goode music before the Tamworth Country Music Festival, Buddy is having his first album launch at Rooty Hill RSL on Saturday, December 17. As well as showcasing music from More Rubbish, he will get in the spirit by performing plenty of songs from It’s A Buddy Goode Christmas.