RURAL fiction is getting in the Christmas spirit with Karly Lane’s latest novel and book launch on the NSW North Coast on Saturday, December 3.
Karly’s Christmas-themed book, Third Time Lucky, took a slightly different road to being written than her previous works and began life as a novella. Avid readers may have picked up December’s Wish, a novella that Karly wrote in 2013. 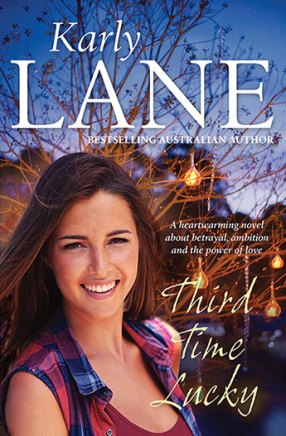 After the success of December’s Wish, Karly has developed the story of Seth Hunter and December Doyle. The couple began as teenage lovers who were torn apart by circumstance and a town’s prejudices. After more than a decade apart, they are reunited in the town they grew up in, Christmas Creek . They’re older and perhaps a little wiser, but the course of true love never runs smooth and such is the case in the relationship of Seth and December.
“I did love their story and, with life experience, they come back different, knowing each other in the past growing up, but they were now different people,” Karly said.
Turning a novella into a novel was also not entirely smooth sailing.
“It was harder than I thought,” Karly said.
“I was assuming that it was going to be easy because I had already written the novella, but I found it difficult. I think it was more my process of writing because I don’t plot or outline anything usually and, being a novella, it felt like it was a plotted out story and each scene felt like an outline.”The NSW North Coast author said she hoped that people would take on some of the Christmas spirit that is in the book and enjoy the Christmas theme of the rural fiction novel.
“Christmas is the core part of the story, so hopefully readers enjoy that Christmas fairytale,” Karly said,  “although its still predominantly a rural fiction title with a large part of the story focusing on the normal community struggles and issues there.”
The prolific author already has two books written for next year, which is she waiting for edits to come back on, and is working on the first of what she hopes will become a three-book series.
“The first story is at 24,500 words and I’m really enjoying this process, which is all very different because I’m intending to write this over a series,” Karly said.
“It’s based on a family of siblings and each book will be a different sibling. The series will be a bit more family-oriented, as opposed to community-oriented books like mine normally are. They all come back to a family farm so the books are all set on one property dealing with very different issues with one farmer, a female war correspondent and a former commando.”

Before she gets too far ahead on the new series, though, Karly will embrace the Christmas spirit with a book launch for Third Time Lucky on Saturday, December 3 at Macksville Ex-Services Club which will double as a fundraiser for Macksville Hospital – a theme important to the storyline of the novel. Karly will launch Third Time Lucky from 2pm to 4pm with Christmas stalls, cocktails and canapes at the club.
“It’s a good way to get the community together and support the hospital,” she said.
There will be stalls from local residents so book lovers can get into their Christmas shopping, a live question and answer session with freelance journalist and rural fiction lover, Rebecca Belt, to launch the book, and raffles and prizes for those who support the event.
Entry is by gold coin donation, with the ex-services club donating the venue, decorations and catering.
Karly is also currently doing a blog tour on AusRom Today and has a featured podcast on the Australian Writers Centre website.
Karly’s next book, If Wishes Were Horses, will be released in May 2017 and is set around the Northern Tablelands and Ebor areas.